While I've always had a healthy (or maybe less unhealthy than some?) appreciation for comics and animation, I've never been an obsessive fan. Lately, however, it seems that these related media have been popping up in my consciousness quite often. First, my friend Charles gave me as a birthday gift the comic adaptations of two of the Indiana Jones movies, films which we were both deeply enamored with as kids (he found them at a flea market in Michigan). My friend Kim just wrote an excellent blog post about what The Watchmen loses in translation from paper to the big screen, and I listened to an engaging and hilarious conversation between cartoonists Marjane Satrapi (whose graphic novel Persepolis

was turned into an excellent film

) and Chris Ware, who designs incredibly elaborate comics that defy the standard conventions of movement across panels. Finally, I learned that Nina Paley, who created an amazing retelling of the Ramayana using Flash animation and old blues songs, will be appearing on campus at the University of Chicago to discuss her work.

, but it did make me realize that this a form of both graphic and narrative design to which I should be paying closer critical attention.

permalink posted by Aaron Rester @ 9:10 AM 0 Comments | Links to this post

Today I had the pleasure of participating in The Southside Arts & Humanities Network's Meet the Press 2009 event. I presented with Adam Thurman of the Court Theatre, who gave an outstanding presentation on *why* arts and humanities nonprofits need to be using social media. For my section of the presentation, I discussed the *how,* providing some of strategies and tools that they might be able to use to implement a social media strategy. My powerpoint is available, but I also plan on turning this presentation into a series of blog posts over the next several weeks. Stay tuned!

Anyone care to lend a poor blocked designer a hand? Last week it was brought to my attention that one of the Law School's digital signs is a plasma screen (which, unlike the LCDs that display the signage throughout the rest of the building, carries a risk of burn-in from static images like the background image below (designed by Four Winds Interactive, the company that created the content management software we're using for the signs). 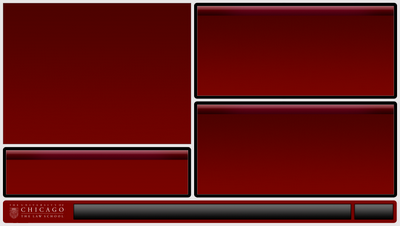 Right now, the top left hand box features live TV, while the other boxes feature text that rotates periodically. The bottom bar contains a left-ward scrolling list of recent additions to our blogs, podcasts, etc. I need to figure out a way to keep the same color from being in the same place for longer than an hour. I've tried moving the various boxes around, but they're all the same basic color. Changing the colors periodically might work, but will be ugly and inconsistent with our brand. Perhaps periodic "commercial" interruptions, where we expand some of our rotating content? Any suggestions would be much appreciated!

It's been nearly as long in coming as "Chinese Democracy," but The Lost Cartographers' debut album is about to be sent off to the manufacturers. The album features cover and disc design by yours truly, working off of a photo of a South Side food & liquor joint that I found on Flickr (the photographer generously offered use of the photo for the price of a complimentary CD.

The goal here was to come up with a design that was timeless, reflected the sound of the band, and -- as our bassist Karl put it -- would look awesome on a t-shirt. 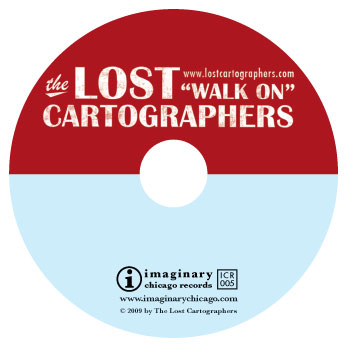 permalink posted by Aaron Rester @ 7:24 AM 0 Comments | Links to this post