Back to School with Edward Tufte

Earlier this week I had the chance to attend a one-day course taught by Edward Tufte, author of one of the classic texts of information design, The Visual Display of Quantitative Information
(he has also written Envisioning Information

). Have attained rock-star status among certain circles of geeks (he spends a total of about an hour at these courses signing autographs), the Yale statistics Professor Emeritus spoke for about five hours on the topic of "Presenting Data and Information." In large part, the course was a distillation of the arguments he has made in his books, with a practical focus on presenting and consuming in-person presentations of information. Some of the points he made that stuck with me:

Presenting (and consuming) information is a moral act as well as a practical one, that must be done honestly.

The process of presenting information should always be driven by the content, not by style or software capabilities. Everything else is "chart junk."

There is no such thing as information overload, only bad design.

There is nothing wrong with tables -- people efficiently consume large amounts of data in tables every day (for example, in sports pages).

You can -- and should -- clarify by adding more data.

Of course, all designers would agree with some of these points (that design should be content-driven, for example) but that last point seems to fly in the face of conventional design thinking. I would love to hear a debate between Tufte and John Maeda (whose book Laws of Simplicity I reviewed a while back).

permalink posted by Aaron Rester @ 7:32 AM 1 Comments | Links to this post

One of the fun parts about being a designer in a band (and probably the reason that so many designers are also musicians) is getting the chance to design all the schwag that goes along with the music: album covers, websites, t-shirts, and of course, gig posters. Designers love doing music-related projects, as other creatives tend to give designers more creative freedom than the average client. Often, particularly with gig posters, we're freed from the usual constraints of having to clearly communicate a set of information (I'm fairly confident that no one in this day and age actually finds out about a gig by way of a poster) in favor of producing a work with an emotional impact, one that tells the story of a band's sound in a single image (check out this great collection for some examples, and this post and its comments for some criticism of this paradigm).

Next week, the Lost Cartographers and I will be playing at Chicago's legendary Empty Bottle for the second time; we'll be opening for the incredible Samanatha Crain & The Midnight Shivers (check out this preview of the show). The Bottle's promo folks asked us to provide some posters, and while we don't normally make posters (the return on investment is just too low in terms of getting people to come to the show), I decided it might be fun to do one for what promises to be such a great show.

I'd be interested to hear in the comments what you think about the poster -- does it capture our sound, and tell the story of our music (which you can hear here if you haven't already)? 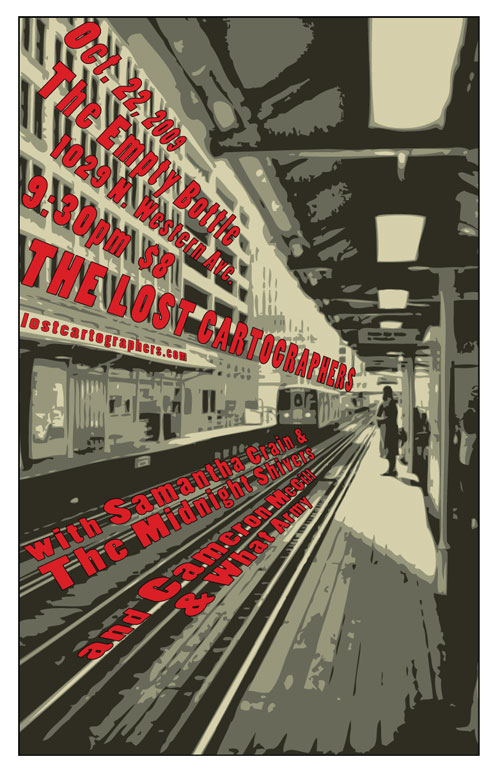 permalink posted by Aaron Rester @ 7:25 AM 0 Comments | Links to this post