Over on the Lost Cartographers' new blog, I've posted four potential album cover designs for our debut CD, "Walk On." Use the comments section there to tell us which one you like the best, and you could win a free copy of the CD once it's released!

permalink posted by Aaron Rester @ 7:45 AM 0 Comments | Links to this post

I recently wrapped up a site design for Forward Alliance, a life coaching and psychotherapy practice run by Ioanna Chaney. It was an interesting process, as it allowed my Design:Intelligent colleague Katie Petrak and me to experience building a small business brand from the ground up.

When Ioanna came to us, she had an existing website that was generally serving her needs; however, she felt that it could use some reorganization and a visual overhaul. She also wanted a postcard-sized mailer that could be used to market her services to other professionals in her building, etc. 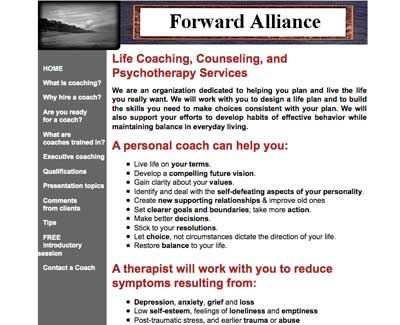 the original Forward Alliance website
In our initial discussions, we touched upon the need for a visual identity that would link the website, the mailer, and her business card and decided that the first step was the creation of a Forward Alliance logo (something she had not previously considered). Building on Ioanna's core mission of promoting personal growth, Katie and I collaboratively came up with the mark below.

From there, we moved on to creating the business card and mailer, with Katie doing the majority of the work on these. Ioanna chose to focus these pieces on the message of growth conveyed by the grass portion of the mark, rather than the entire mark, since she felt that they were intended more to market her personal services rather than the business as a whole. 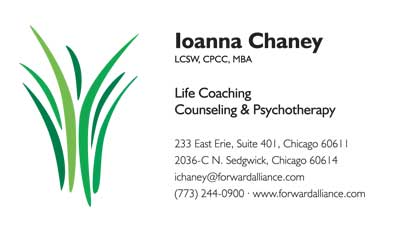 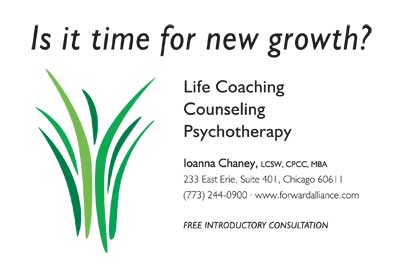 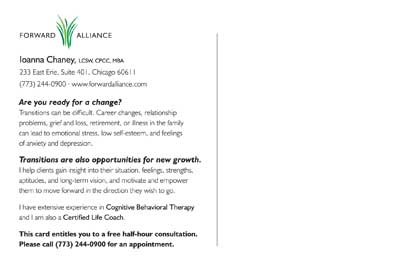 postcard, back
Finally, I set to work on the website. The goals of this portion of the project were to create a standards-compliant (and therefore more search-engine friendly) site, with a cleaner, more polished look that was still friendly, warm, and welcoming. Since frequently updated content is also more attractive to search engines, we also decided to convert the "Tips" section of the previous site -- in which Ioanna had posted some of her favorite quotes and sayings -- into a blog-like section of the site called "New Growth." The tips section has always been a favorite of her clients, and now they have the capability to have new tips delivered directly to the their inboxes or feed readers. If you have a chance, take a look at the site and let me know what you think! My A List Apart article has been translated into Italian by Federico Melosi, an Information and Communications Technology Trainer at Università di Pisa, on his new tech blog lo Scaffale Razionale. Incidentally, Federico is also a musician -- check out his bands, Egon and gli Ambasciatori dell'Amore.

permalink posted by Aaron Rester @ 10:11 AM 0 Comments | Links to this post

Twitter has recently been making strides to cut down on spam on the microblogging service. Twitterspam is an interesting phenomenon, as it turns on its head the usual notion of what constitutes spam.

Traditionally, spam has comprised unsolicited advertisements such as the ones for V1@gra you find in your email inbox every day, or links published in the comment sections of blogs. In short, spam has always been unwanted information pushed by the spammer to the spamee.

Commercial or promotional use of Twitter is allowed. There are many companies who create valuable, opt-in relationships with users on Twitter who want to keep up to date with them. However, if you are following other accounts in order to gain attention to your account or links therein, you may be considered spam. [emphasis in original]

Take a moment to consider what this means: potentially accusing of malfeasance users who are requesting to view what is for all intents and purposes a public stream of information (viewable on the Twitter public timeline and even indexed on Google). It's not unlike me accusing you of a malicious act for subscribing to this blog. Furthermore, the language is so broad as to be almost absurd; if you don't want to gain attention for one's Twitter account, why would you undertake the essentially exhibitionist act of opening one to begin with?

Now, I'll confess that I've a vested interest in all this, since I've undertaken activity on Twitter that would probably be considered spamming under this definition. I opened an account for my band, and started following a bunch of people I didn't know (for the record, hardly anyone I know in meatspace is even on Twitter) who lived in Chicago and/or expressed interest in alt.country music. Admittedly, part of my motivation for doing so was to alert those I was following to the existence of my band; however, I also follow their Tweets to find out what's going on in the city where I live and in a musical genre that I love. How will Twitter decide whether that action constitutes spam or not? By way of an algorithm? Or by means of the human spam wranglers they have begun to hire?

Of course Twitter users should have the right to keep their Tweets out of the hands of those they don't wish to see them. But Twitter already makes that very easy by providing the ability to make one's updates secure, requiring approval of all followers. Defining any act of following a Twitter feed as potential spam will only hamstring the social networking potential of Twitter, as users become afraid to reach out to people who don't already know them. Instituting algorithms to decide the intentions of human beings will only lead to a lot of unhappy users.